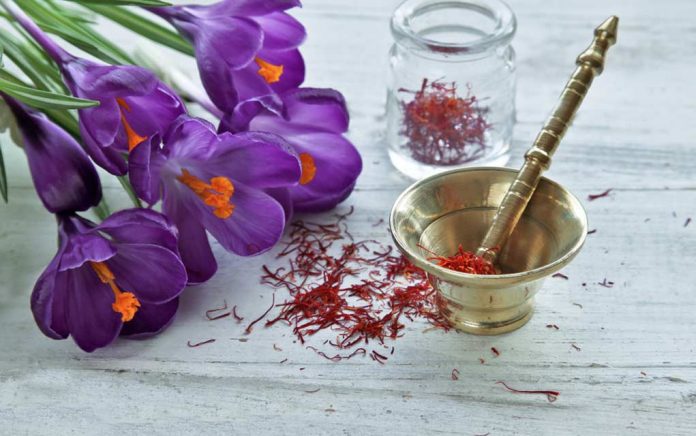 (AscendHealthy.com) – Spices have been used in medicine for thousands of years, dating back to at least 1500 B.C. — and for good reason! Not only do spices make our food taste great, but they can offer numerous health benefits, including an improvement in mood. If you’ve been struggling with anxiety and depression, you might consider adding these five spices to your life.

Nicknamed the “sunshine spice” because it’s believed to have mood-boosting properties, saffron has been studied for its ability to help with depression and anxiety. The research has been promising, with one study even finding saffron to be as effective as Prozac. A 2013 meta-analysis study found that saffron supplementation can improve the symptoms of depression in adults with major depressive disorder. A 2019 study found saffron also improved the symptoms of anxiety.

To be most effective, the spice should be consumed every day. It can be used savory or sweet in dishes like rice, chicken, pork chops, paella, ice cream, puddings, mango parfaits and lemon saffron cheesecake cups. You can even brew a saffron tea.

Turmeric has long been known for its role as an anti-inflammatory, which might make it a good natural mood booster. A 2017 study showed a correlation between inflammation and depression. And a 2018 study on rats suggests that curcumin, the active component in turmeric, might help alleviate anxiety — especially the type associated with post-traumatic stress disorder (PTSD). A 2016 meta-analysis of six clinical trials examining the use of turmeric to alleviate depression found that curcumin does show significant antidepressant and anti-anxiety effects without adverse side effects,

Another versatile spice, turmeric can be used in meat dishes, pasta dishes, curries, pickles, side dishes and desserts. One popular option is golden milk, a blend of turmeric, ginger, black peppercorns, cinnamon, honey and the milk of your choice (coconut works well), served hot. It’s warming and comforting.

Cinnamon has been used in medicine for centuries, thanks to its anti-inflammatory and antioxidant properties. Depression and anxiety were lowered in mice that were given cinnamon oil in a 2017 study. In addition, because cinnamon steadies blood sugar levels, consuming it regularly may help combat anxiety and depression associated with hypoglycemia or insulin resistance.

Make it into a tea or add it to other drinks, put it in stews, oatmeal, pancakes, tagines, chili or masalas. A sprinkling over fresh pears or apples can be a fresh, simple dessert, or bake it into a fruit crisp.

Ginger has long been used to manage diseases involving inflammation — and for good reason. In 2018, a study on mice found that regular consumption of ginger helped not only with reducing inflammation but with reducing depression and anxiety. Gingerol is the active constituent in ginger and the one primarily responsible for the anti-inflammatory properties.

Whether you add it to a stir fry, fresh vegetables, citrus salads, or brew it into teas, ginger adds zing wherever it lands. A thin slice of fresh ginger held against your gums can even help alleviate nausea.

Known for its anti-inflammatory benefits, rosemary extract was tested on mice in a 2018 study. Researchers examined rosemary in treating depression and anxiety, as well as examining how gut microbiota reacted and how the gut-brain axis was affected. Rosemary was found to be very effective at treating inflammation, depression and anxiety in the study. Drinking and inhaling rosemary has also been found to not only boost mood but may also improve memory and enhance concentration.

Adding some of these species to your diet every day could help not only your mood but keep inflammation at bay, as well, Try these spices in combinations, too! Spices can make your food and your demeanor shine. Be sure to talk to your doctor before adding spices to your life to make sure there are no interactions with any medications you may be taking. And if you need some additional help in dealing with depression or anxiety, contact your doctor to discuss treatment options.